I have a theory about why Americans downplay their culture of hugging when living as expats in China. 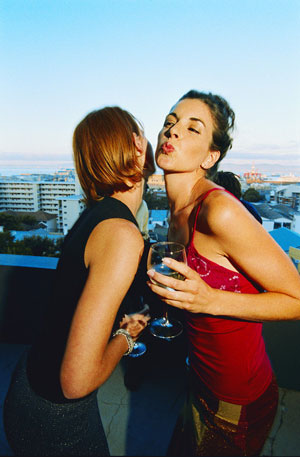 In the 2 years I’ve been in China, I’ve noticed that American expats whether in Beijing, Shanghai, or elsewhere have completely abandoned this cultural norm.
Americans have adopted the practice of kiss-kiss, or kissing the air while touching first the right cheek then the left cheek. Two girls, and a girl and a guy will do it.Â  (Two males continue to shake hands.) They don’t even need to be close friends, mere friends or familiar acquaintances are given over to the kiss-kiss greeting.

This kiss-kiss greeting is common in Latin American culture and European culture.Â  Notably, French and Italians do 2 kisses, while Argentines and Dutch do 3.

I, as an American expat in Shanghai, have become accustomed to doing the kiss-kiss greeting and farewell to such an extent that when Americans who are in town visiting hug me I am shocked and feel somewhat uncomfortable.

Anyway, on to my theory…Â  My theory is that, largely due to the current administration, because Americans are so hated abroad, we try to diminish our American-ness by adopting other cultural styles.Â  We try to make ourselves seem less American by acting like Europeans or Latin Americans.Â  We attempt to show that we are citizens of the world and embrace other cultures by adopting them as our own, rather than beating them down, much as has been done in Afghanistan or Iraq.Â  Obviously, this more of a necessity and common practice in expat life since daily we seek to be accepted by associates and friends from around the world who are frequently not fond of America.Â  As expats, we are attempting to minimize our American-ness in the presence of a global community and seek acceptance among our kiss-kiss-accustomed peers.
I’m curious to know, if this is just a phenomenon of expats in China, or if this happens among American expats elsewhere in the world.Â  Comments on the expat experience elsewhere and agreements (or not) with my theory are welcome.

As far as whether I like the practice, in some ways I do, as it feels refreshing and somewhat less awkward than the standard American hug.Â  However, sometimes I do miss the benefits and closeness of a hug.